Jung and Intuition: On the Centrality and Variety of Forms of Intuition in Jung and Post-Jungians

This book may be one of those publications of basic value to all students of analytical psychology, because it attempts at the systematization of the thought of one of the most unsystematic thinkers in the field of depth psychology. And not only that, it attempts at systematization of his thoughts upon one of the most obscure topics within that field, which is the phenomenon of intuition.

To quote the editorial description: this study „examines for the first time the twelve categories of intuition described in both the works of C. G. Jung and the post-Jungians. Nowhere, other than in Jung’s own work, has intuition been more fully treated. Each form of intuition is critically explained in the historical context of its appearance and located in one of the four spheres of Jung’s psychology―the unconscious, the under-conscious (Unterbewusste), consciousness, and Jungian and post-Jungian practice. This work brings Jung’s entire psychology in all its depth from 1896 to its contemporary use into greater clarity for both professionals and lay readers”.

The publisher states that the author „persuasively shows that intuition is at the heart of Jung’s psychology. It is central to his concept of the archetypes as well as to his understanding of the subconscious and the active imagination. It also involves both clinical and philosophical approaches, as powerfully demonstrated by his pioneering work at the Burgholzli Klinik in Zurich”.

Even though the quality and soundness of this study is to be determined by the critical thinking, feeling and sensing of the readers, the very subject, the structure and the goal of this research, is the best recommendation. 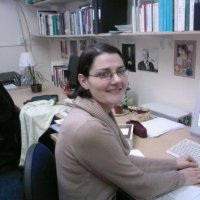 Nathalie Pilard was born in Paris, where she started her studies in history and religion at the universities of Panthéon-Sorbonne, Denis Diderot, and the Ecole Pratique des Hautes Etudes. Her thesis on C. G. Jung and the Confucian Changes was subsequently published in France. She then joined the University of Aberdeen, Scotland, where she completed her PhD on C. G. Jung and intuition. An independent scholar, she is also a collagist and a drawer, currently working on a tarot deck.

» Books » Jung and Intuition: On the Centrality and Variety of Forms of Intuition in Jung and...