Jung’s Theory of Complexes and the Neurosciences

In 1905 Carl Gustav Jung published his “Experimental  Researches” related to the Word Association Test [3]. He had noticed that certain words administered in some subjects elicited an unexpected reaction of hesitations or an emotional component in non-verbal reactions of the person, or the associated word appeared incongruous with a tangential relationship to the stimulus word.

Jung suggested that there is an emotional involvement of the subject in this particular behaviour, in some way triggered by the stimulus word. In 1934 Jung published “General considerations on the theory of complexes”, a theory which, starting from observations on experiments related to verbal associations, is supplemented by clinical observational data from his patients.

Jung speaks of feeling-toned complexes, referring to those situations where there is an excess of psychic energy, exaggerated affection compared to the context, trends to act out, an autonomy from ego functions [4].

A complex is „a set of representations, thoughts, memories, partially or totally unconscious, with a strong emotional charge” [1], which limits the freedom of the ego. A kind of black hole that absorbs energy.

It’s interesting to associate these clinical aspects of Jung’s complex theory with the results of the latest research in neurosciences. Those studies were made possible by neuroimaging techniques in the course of audio-visual stimulation of the subject, the techniques used since the early 90s. What I’m particularly referring to arevan der Kolk studies [8], an active psychiatrist and clinician, researcher and teacher in the area of post-traumatic stress since the 1970s. He is the founder of the Trauma Center in Brookline (Massachusetts) and director of the Complex Trauma Treatment Network.

According to Paul MacLean [6], we have three different brains:

MacLean compares the relationship between the rational brain and the emotional brain as that between a rider and his horse.

„As long as the weather is good and the location is quiet, the rider can feel that they have very good control. But sudden noises or threats of other animals can make the horse excited, putting the rider in difficulty ” [van der Kolk, 8].

Whenever the limbic system realizes that there is danger, the communication between the emotional brain and the frontal lobes are weakened [8], and the horse takes command of the situation.

According to latest neuroscience researches, the amygdala is the limbic brain structure which gives an emotional significance to sensory information from the thalamus. If a threat is detected, the amygdala sends messages to the hypothalamus which secretes stress hormones causing a reaction type of fight, flight or freeze. LeDoux calls this route „the short way”. The other way, „the long way”, provides for the involvement of the hippocampus to the prefrontal cortex which interprets sensory input through the memories stored in the hippocampus and neural networks in the prefrontal cortex, making us aware of the inputs received. If the amygdala interprets the threat as too dangerous and/or the filtering system of the cerebral cortex is too weak, the automatic emergency responses take over with the activation of hyperarousal reactions or outbursts of anger as it occurs in post-traumatic stress disorder [8]. The short way is a kind of an arc reflex that produces a reaction without the involvement of the cortex, and then determines a non-conscious automatic response. 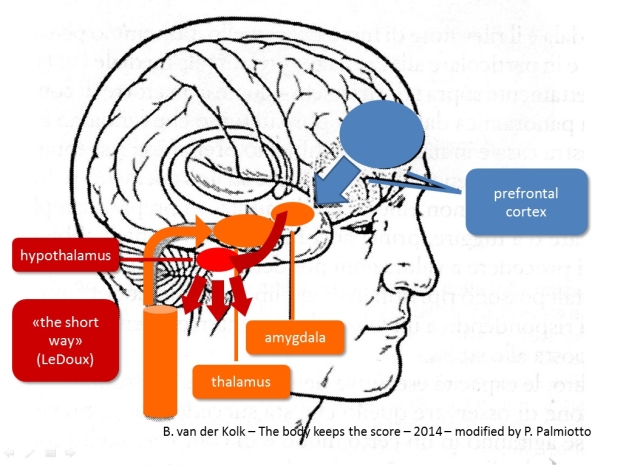 According to van der Kolk and Siegel, there are some sensory inputs, memories, affections, stimulating the amygdala, make us live the fear, anxiety, or anger, bypassing the modulation of prefrontal cortex. The limbic brain takes command triggering an autonomic response that bypasses the cerebral cortex and directly activates the hypothalamus. When the stimulus puts the limbic system in alarm, it takes over and is no longer being modulated by the cortex and triggers a massive fight, flight or freeze response.

it is legitimate to think that Jung, with the theory of complex based on clinical observations, was already describing the mechanisms we know today through the results of these researches of neurosciences.

Jung’s feeling-toned complexes, bypassing the cortex, activate the limbic system in a state of alarm. Often this reaction is exaggerated with respect to the external stimuli, a wrong perception of the danger that is internalized in the person.

The studies on  LeDoux’s „short way” about the amygdala and the limbic brain functions in situations of stress with fight, flight or freeze responses, confirm a neurophysiological level, what Jung had seen and conceptualized in a clinical setting.

When talking about trauma, we must not think necessarily to a single exceptional traumatic event as an earthquake, a serious car accident, a sudden loss. There are also less recognizable traumas, a set of micro-traumas that persist for long periods as for example in unhealthy attachment relationships where there is abuse or neglect. “Abuse”, comes from the Latin word „ab uti” meaning misuse, and refers to attachment relationships.  It does not recognize the child’s needs, but the child is often used to meet the adult’s needs. Even these traumas can result in activation reactions to stress that bypasses the prefrontal cortex, triggering a series of automatic responses outside the modulation of the cerebral cortex. In this regard, Van der Kolk speaks of „disorder by developmental trauma”, where unhealthy attachment relationships determine neglect or abuse. So when we talk about trauma, we must not think only of exceptional events, but also to situations related to the context of life of the subjects. In clinical practice, it is customary to observe the emergence of unresolved issues that manifest themselves with these reactions of excessive animosity, high psychic activation, slightly modulated and outside of ego management. Exaggerated reactions with respect to the stimuli of the external environment.

What is fascinating is certainly the concept of analyzing things with broad horizons. We can integrate very distant concepts such as clinical and neurophysiological viewpoints of the same phenomenon.

Following the lines of this reflection, if we operate a systematic comparison between the psychodynamic theories and theories of neuroscience, other connections can emerge. For example,  it would be very interesting to investigate possible associations between Bion’s beta elements [2] and these concepts of neurophysiology.

[4] Jung, C.G., (1934) “General considerations on the theory of complexes” in CW 8 Structure & Dynamics of the Psyche, Princeton University Press.

One Response to Jung’s Theory of Complexes and the Neurosciences