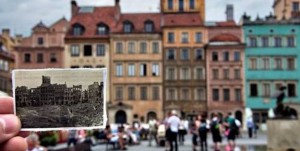 I found the photo posted on the right on „Poland for Your Eyes„ blog. The description below said: „1944 & 2014, Warsaw, Poland. This is the city that rose again”. It caught my attention, so I saved the link and shared it on Twitter and Facebook, as we usually do now in the age of social media, directed by the need that pushes us to make everyone participate in what we see or think. Several hours later, observing all the likes and sharings and musing on this special way of social remembering we are so engaged nowadays – where images and phrases (the shortest and the most informative the better, social media specialists warn) are just impulses following through our short term memory – I found myself again drawn into thinking about the nature of remembering.

I think there is no wonder that becoming a Jungian psychoanalyst I made the main point of my studies cultural remembering. Living in the country, Poland, in which, as some people say, we are immersed in the „excess memory”, where poems say that our memory was „shot through” (see the end of the post), and memory for some equals „truth”, where the words of Adam Mickiewicz „If we forget about them, Thou God, forget about us” repeat endlessly on monuments, blogs, in political slogans, one naturally searches the way to deal with the complicated and complex issues of remembering and forgetting traumatic past. This dealing with the past can take different forms and psychologist naturally wonders whether it leads to connecting or disconnecting of the painful experiences, and how/whether the past influences and shapes the everyday life of people living within traumatized culture. 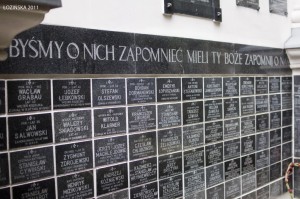 „If we forget about them, Thou, God, forget about us” – symbolic grave of murdered in Katyn, Warsaw
photo: A. Lozinska 2011

This question is not so easy to answer though, as it may seem while putting it for the first time. First of all after the 2nd World War it is hard to think  of any European culture as not being post-traumatic („western civilization ended at Auschwitz” says Frank Seeburger quoting Spiegleman „event though, for most of us in the western world today ‚we still haven’t noticed’’). Secondly – what does it really mean to remember trauma on the cultural level?

Let me concentrate on the latter question today. Traumatic experience is sometimes described as the death of time (Connolly, 2011) (history without memory, history as abstract dead facts, and a memory without history, purely subjective, mythical and therefore ineffective for the creation of meaningful narratives) and death of language (“the occurrence of totally senseless events – events that have no explanation, indeed cannot be explained” (Grubrich-Simitis, 1984)). Trauma shuts down the narrative, makes the experience frozen, out of its individual and cultural context (Laub, 2012). It haunts the psyche (Schwab, 2010; Abraham&Torok 1994), creates within it the crypt, within which traumatic experience remands „unclaimed” by no one, unknown and unknowable.

Thinking about this psychological definitions one can wonder whether it is enough to remember the past historically – as a set of given events („abstract dead facts”), depending in their interpretations on the current politics. History as such describes a „claimed” experience, the experience we can admit to and include through our social narrative into cultural identity. This kind of social remembering, although necessary, when done without a deeper acknowledgement of mechanisms of collective consciousness and unconscious easily turns into one-zero struggle for dominance, and depends strongly on the current politics, which results in competitive memory (Rothberg, 2009). But what about the „unclaimed” experience, the one about which Carl Gustav Jung beautifully says in „Civilization in Transition” that it eludes the enquiring eye of the historian and is deeply buried, experienced by all and observed by none. He describes it as a secret psychic attitude unknown even to the individual himself, and transmitted by no historian (Jung, CW10). Who or what remembers this unclaimed experience when we are unable to? Do the walls and places remember when we fail to?

Coming back to pictures of Warsaw – and Warsaw was really the city of ruins after the 2nd World War, as the reader can see at the picture above this paragraph – one is tempted to say, that sometimes all we have are ruins of memory, empty spaces which are scary for us, living in the changed world, accustomed to easy social communication, easily getting information, and easily forgetting them. We are reluctant to think that the past might remain alive in the transgenerational transmission within our individual lives, as psychoanalysts point at. „Let past remain past” we sometimes say and fill our thinking about memorizing and commemorating of the past with images of obligations and truths as it helps us keep the past comfortably buried within inner crypts. We prefer the short term memory, deluding ourselves, that this is the image of the life as it is without realization that sometimes it is the defense against the unbearable past, as we lack tools to relate to it. But coming back to what Jung said, there is still this secret psychic attitude experienced by all and observed by none, something we may feel for a moment while looking at pictures of Warsaw in ruins – or any pictures close to the heart of readers from other cultures – we may also notice it for a moment reading poetry or memories that relate to that times. One of such poems is a brilliant portrait of city being liberated after the 2nd World War written by Polish poet Ewa Lipska and it gives us some clue what happens to the collective memory of traumatized culture experienced on the individual level. Lipska writes here about the generation born after the 2nd World War, „hinge generation”, „generation after”, that passed its unspeakable knowledge of the traumatic past to my generation. I think the reader will easily notice all questions that explode from putting together the issues of contemporary „short term memory” and traumatized „shot memory” in one text, but let’s stay with them for a little while to let them grow and take shape and just listen what a poet has to say about memory:

At that dawn
the fear was carried off the city in wheelbarrows
and the bullets were swept away.
However the trembling faces still haven’t cooled off
People were applauding freedom.
The gates were opening.
In the gates women were giving birth to children:
Us. How festive. Called before the dawn.
Immune to the body. Recovered from the clanking of weapons.

With our birth honour was given to the dead.
And we are to carry the memory that has been shot through.

Connolly, A. (2011). “Healing the wounds of our fathers: intergenerational trauma, memory, symbolization and narrative.” The Journal of Analytical Psychology, 56(5), 607–626.

Grubrich-Simitis, I. (1984). “From concretism to metaphor. Thoughts on some theoretical and technical aspects of the psychoanalytic work with children of Holocaust survivors.” The Psychoanalytic Study of the Child, 39, 301–319.

Poland for Your Eyes Blog