An article by Valerie Lum about the works of Maria Taveras, the Jungian analyst and award winning sculptor. It describes the creative dialogue between collective unconscious and artist’s ego, a way to approach the dream material  as a source of images for artistic creation. See the full text and video below for examples of Taveras' creative works.

More than ten years ago, Maria Taveras had a distinctive dream while visiting the C.G. Jung Institute in Zurich, in which the image of a woman who was a serpent from the waist down permeated her subconscious, and it wouldn’t rest there. That dream told her to sculpt, an art form she was not trained in, and she produced what turned out to be an excellent representation of Melusina, a goddess who is prevalent in French fairy tales. Strangely enough, Taveras was not familiar with the story until after her sculpture was completed. „These images are archetypal,” the sculptor explained over the phone. „They are relevant to all females.” (…) By sculpting dream images, Taveras says she is creating a dialogue between the collective unconscious and her own ego, which moves her toward self-realization, a process that she calls „interactive morphing.”

The sculptures and paintings that Taveras depicts from her dreams are representations of very personal transitions; therefore, she doesn’t reveal the true inspiration behind some of her works. However, since they are symbolized by archetypal figures that are a part of the universal unconscious, Taveras feels free to put these pieces on display. In 2004, she showed a terra cotta sculpture entitled „Transformation of the Feminine,” depicting a woman stepping out of a tree. It won a 2004 Gradiva Award from the National Association for the Advancement of Psychoanalysis. Although she was initially only familiar with painting as an art form, Taveras has since furthered her education in the sculpting realm through classes and private tutors. „They were at a loss initially because it’s such a different way of approaching sculpting,” Taveras says of her teachers. Instead of going about it aimlessly, Taveras worked specifically with her dream images. When sculpting, she tries to apply Jung’s idea of developing a dialog between the collective unconscious and her own ego, so all of the emotions she experiences while sculpting can get reflected in the piece. 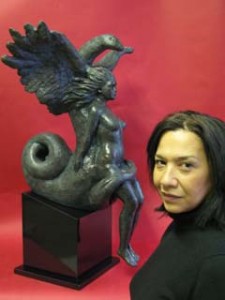 Maria Taveras is a certified Jungian analyst in New York City. She is a graduate of the C.G. Jung Institute of New York. She has been in private practice as a psychotherapist since 1991. As an artist Maria Taveras sculpts the psyche. She creates works of art using archetypal images from her own dreams.