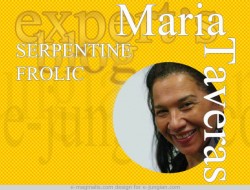 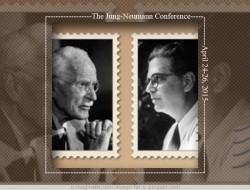 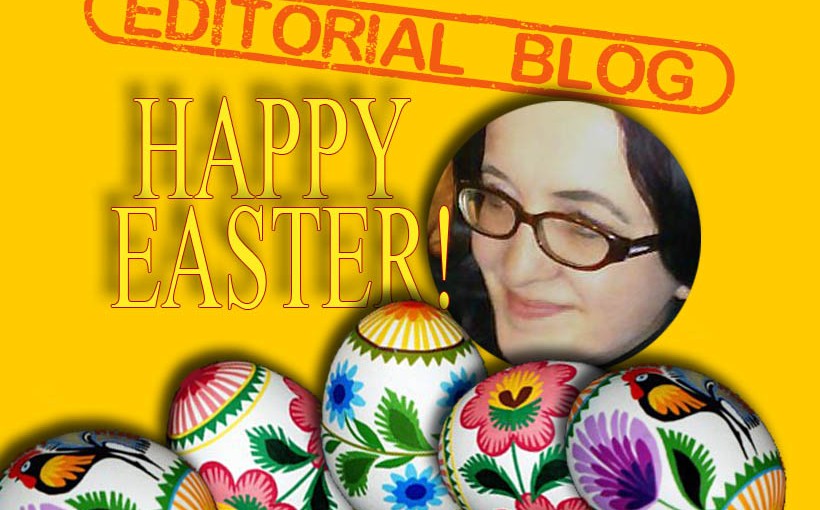 Spring rituals and holidays ere inextricably connected with the imagery of the renewal and rebirth in different cultures. Comparison of motifs that appear in different cultures we come from would make a fascinating analysis and the most probably we would discover that distant cultures have much more in common than we assume. Today, together with warm wishes of Happy holiday season, we would like to tell you some stories about one of the oldest symbol that appears in Easter tradition – the egg. 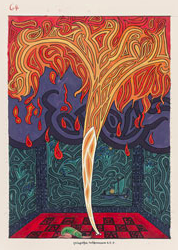 Red Book – The rebirth of the God from the egg

Interestingly the egg is the symbol that in the „Red Book” Jung choses as a way to renew Izdubar – an Eastern solar god he meets on the way while he searches for the contact with the East. Yet Izdubar, looking for the wisdom of Western science gets sick while getting in touch with its rationalistic attitude. Here the egg again, as it often does, becomes the symbol of resurrection – Izdubar squeezed into the size of an egg is taken into the welcoming house where it can find healing and comes back renewed on the third day.

In many cultures the egg is the element of cosmogony myths that tell the story of the world creation and beginning of life on earth. Within Polish tradition – the culture of origin of your editors – the painted eggs that appear during Easter (we call them pisanki what in the literal translation would mean „the written ones”) originate from adaptation of old Slavic religious traditions into Christianity, and it is similar for other cultures in the Eastern Europe that we were closely connected to in the past (like Ukraine for example).

Slavic religions according to Czeslaw Bialczynski[1] (Polish writer and the author of the blog on Polish Slavic myths and traditions), originate from old Persian religion and especially from its Scythian and Sarmatian branches. According to those myths the divine – the highest God Ahura Mazda – was the god of light, holiness and purity. Thus in the roots of our cultural heritage we find the similar conflict Jung is writing about in the Red Book – the West meets East and its solar god, and this meeting creates special borderland-like character of this region with its eternal struggle between rational and differentiating Western ego-counsciousness, and spiritual language of the soul and imagination (it can bee seen in different literature examples in Romanticism era that referred strongly to old Polish pagan roots). 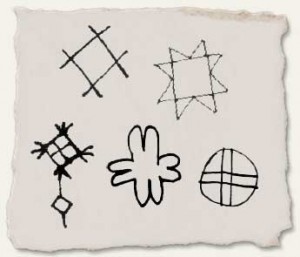 „According to old Persian myth, one of the many speaking about world creation”, says Wierzbowski „that are until now present in the Slavic and Hindu mythology, the highest God was born out of the solar egg as there was no woman that could give him birth. The egg symbolized the cosmic order, the solar ellipse, the life, the Tree of Life (the Tree of Trees, the Tree of the World), vitality, long life. According to some of the myths the world had a shape of golden egg and stood on the hen’s feet.” Thus decorating of the eggs had a special place in Slavic rituals, and symbolised both cosmic powers, powers of nature and humans fate and healing. Some of those patterns you can find on the pictures at Bialczynski’s website, and it can be easily seen that they are still present in the patterns that are used for decorating contemporary eggs! 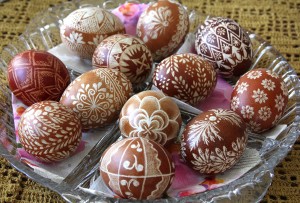 Those old primary symbols and their meaning got Christianised in the course of time, and as one of the a legends say, the painted eggs are made the most often red (boiled in the onion for example) as when Mary Magdalene came back home after Christ’s resurrection she discovered all eggs in her house turned red.

The other folk tale written down in Ukraine in 19th century explains why the eggs should be painted:

The God was sailing by boat through the primary waters. Looking around he noticed that out of the sea foam unknown figure emerged. „Who are you?” – asked God. „Take me to your boat, and I will tell you”, responded the figure. It turned out it was Devil and while they were sailing the Devil suddenly said: „It would be good, if the place we are sailing through was solid”. „It will” responded God ” „Go into the sea and bring me a handful of soil, and say that you are doing it in my name; bring it, and I will make the earth out of this sand”. Devil did as the God said, took some sand in his hand but said: „I take you in my name” instead. When he came out of the sea, he discovered there was no sand in his hands. He did it again, saying: „I take you in my name”, and the situation repeated. Only when he went down and said: „I take you in His name” after his coming back there was some sand left under his fingernails. God took the sand, spread it above the waters and thus the earth was created… (Then God defeated the Devil, enslaved him in the rock or in the hell, chained him, and make the rule, that the Devil would remain there as long as people will paint eggs.)[2]

As we can see the Slavic tradition of painting eggs tries to hold the opposites between the West and East, the darkness and light, good an evil. To mark this we still have painted or boiled in onion scratched eggs for Easter breakfast and wish each other tasty egg for Easter wishes.

Sharing these stories with you we would like to search for the different points of meeting between different places in the world we – creators of e-jungian.com and its readers – come from and invite you to celebrate with us and enjoy this special moment of the year with its hope for rebirth and renewal. Happy Easter and a tasty egg!