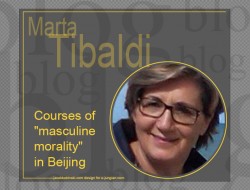 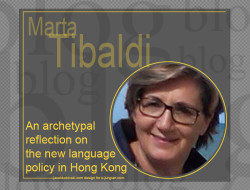 Marta Tibaldi – An archetypal reflection on the new... 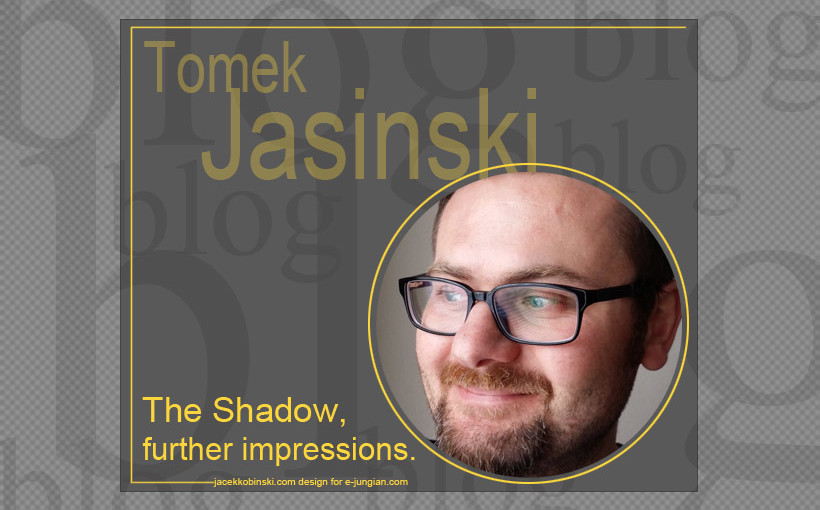 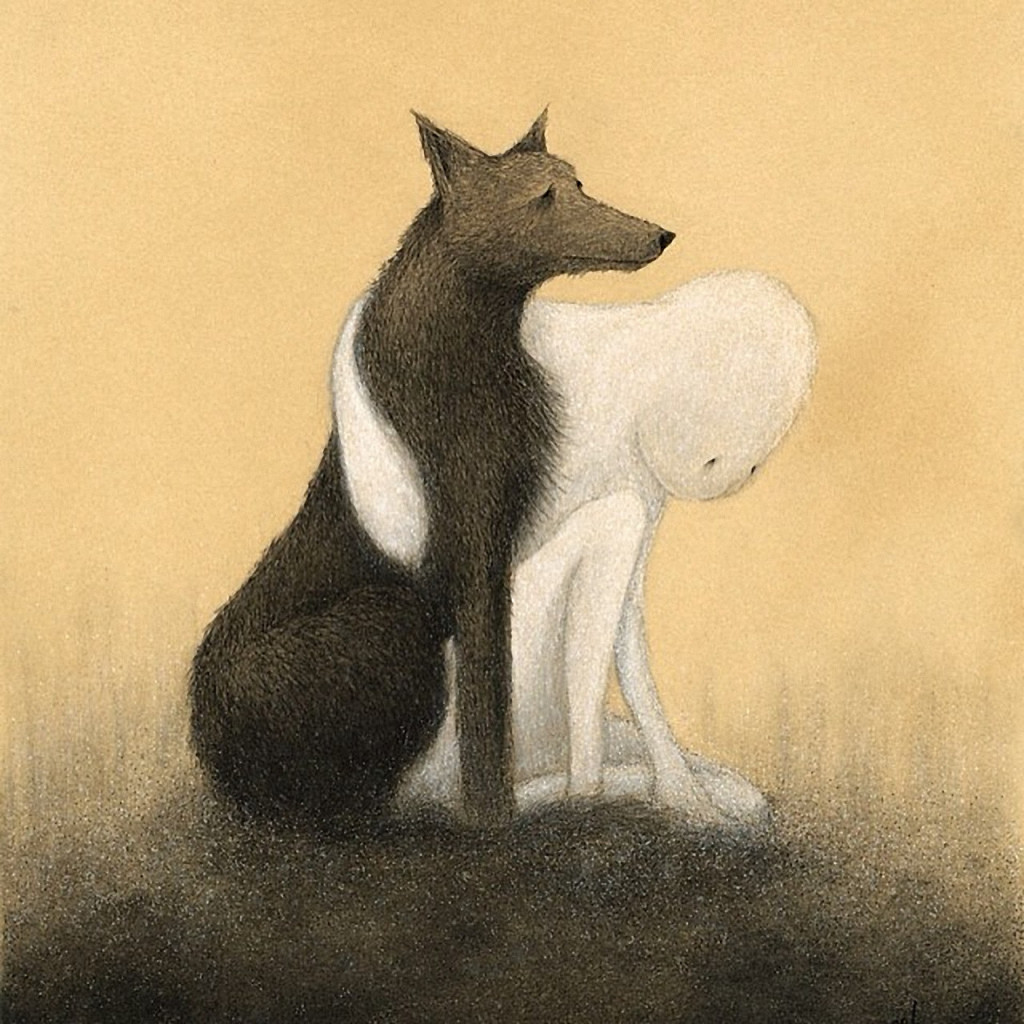 The painting is entitled „Stuff Out of Which Reality Arose“.

It depicts light and weakened figure leaned on the sturdy animal back. The figure is staring at the ground. The wolf is looking forward, straight on.

This static picture reveals the dynamic play of opposites: the luminous one with dark, instinctual and dangerous. The tranquil look of the wolf towards the horizon contrasts with gloominess of the gaze riveted in the earth. The future, filled with possibilities, opposes the experience of the present just like the space between that couple and the horizon juxtaposes the density and stickiness of the soil.

The earth is both the ground for feet and the cover for the mysteries of the past. Those mysteries that are oftentimes difficult, painful and filled with suffering. In her depths she conceals long-buried experiences of the past. In the same time, they carry the seeds of the future. Filled with peace and self-confidence, the figure of the wolf sprouts from the ground and boldly looks ahead. 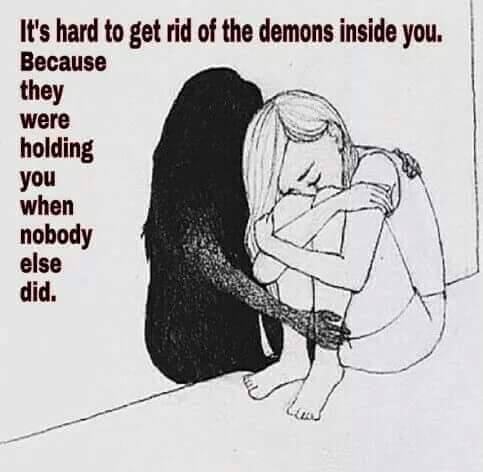 Should the shadow be but a bag dragged behind, we wouldn’t have got much of the choice. We could either keep dragging it or try to forsake it. But between those too there is a third option, as if the linking bridge. Can we imagine the shadow as our support? In our contemporary times, en masse post-traumatic, such vision not only carries special meaning. It has become its meaning.

The time collapse is accompanied by the peculiar enantiodromia. While mankind is becoming more and more demonic, demons are taking over the caring functions. When reality cuts off the mind, instincts are taking control. In the moments of mindlessness any attempt to hold onto thoughts is doomed to lead towards the free flight into the abyss.

Sometimes we enter the area where all that remains is to listen. There is no chance for any action nor any hope for the new solution. Mother Teresa of Calcutta was asked in an interview “When you pray, what do you say to God?”. The answer was: “I don’t talk, I simply listen”. The interviewer then said: “Ah, then what is it that God says to you when you pray?“. She replied: „He also doesn’t talk. He also simply listens“. There was a long silence. Eventually Mother Teresa said: If you can’t understand the meaning of what I’ve just said, I’m sorry but there’s no way I can explain it any better.”

How the experience of darkness carries the potential, is an element of mystery. One book on relational analysis, a classic by Antonino Ferro, is entitled “Seeds of Illness, Seeds of Recovery”. It suggests that we would seek for solution at the source of suffering. Deep rapport with the living experience of suffering unveils this mysterious duality, regardless of our ideological provenance. In the same time, Hillmanian hundred years of psychotherapy leading to the world getting worse points at the psychoanalytic hubris, which in itself is a daemon. It is an author of Luciferian illusion that insight and enlightenment can lead to the mastery over fate and alteration of one’s destiny. We need a distance from such inflationary phantasy so that some conscious participation in our destiny is possible and without falling into historical-hysterical fatalism. Future is never limited to one solution. Otherwise it would have denied its own identity.

Witnessing is at the core of wide-awake attitude. One Sufi author writes:

“Every seed carries a secret. We will never come to fully know this secret, because it belongs to the mystery of creation. Yet we can learn again what hundreds of generations did before us, namely to live with the secrets, to use them as gifts, and to honor them as a source of life on this planet.

The first step in learning to live with a secret is to listen.

When I was a young child, my mother gave me a seed of a bean. She showed me how to plant it into a pot filled with black soil and how to keep it warm and moist. And then I had to wait.

For a young child this took a very long time. Every morning I would visit my seed, invisible in the darkness of the soil, and because I could not see anything, I remember that instead I tried to hear something. It was around the same time that my mother was pregnant, and I used to put my ear to her belly to communicate with the baby I could not see or touch. So I did the same with the invisible seed: I put my ears close to the soil and listened. I do not remember if I ever heard something, but I remember the listening. It was like an intimate conversation, though silent and unheard by anyone else.”

Silent and unheard by anyone else conversation is like the prayer of Mother Teresa.

Living in a dark time requires an awareness that what is bright and clear is fading and is weigh down to the ground, whereas what dark and ambiguous is becoming a pillar. Nothing is as it appears. Values are in reversal.

The wholesale culture suggests that images of collective heroes are nowadays in crisis and they turn against one another. Just look at the recent Hollywood trailers: „Superman vs Batman”, „Captain America: Civil War”. We got lost. In our reality, simple differentiation between good and evil is fallacious and insufficient. In this reality careful attentiveness bears on a special meaning as something basic in distinguishing between values. But it also constitutes a counterpoise of value judgements. The wolf is pacing the world with his nose to the ground. His attitude guarantees safety and firm contact with reality. It is a counterbalance for the snub-nosed psychoanalysis in their futile attempts to grab their god’s legs. 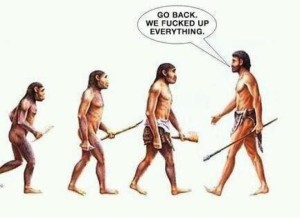 The combined conclusion of the initiatives like the Climate Change Conference and voices of mindfulness like new papal encyclical is confronting us with the fact, that  we are destroying the environment which gave us life and sustains our life. As a collective we are slowly reaching the edge of our possibilities but it is still so hard for us to admit that we fucked up.

Desacralization of life is, and will be, causing irreversible damage.  We won’t escape the consequences of our own blindness by trusting in the redemptive power of carbon neutrality.

The genius of Jung is not in fore-reaching his own epoch and contributing to the transformation of the paradigm, nor in the renaissance quality of his mind to encompass such a vast territories. The value of his thought is being carried by the fact that in the course of time we constantly discover still new levels of its topicality.

Transitional time is the twilight time of obscurity. In this time it is difficult to ascertain one’s position in the world. Perhaps it is the time of listening. As if the kind of prayer which involves mutual listening without unnecessary words, without drawing too much precipitant conclusions. At the time dominated with efficiency directed actions, an attitude of non-doing isn’t popular. Contrary to appearances, it is a position contained in the shadow. Let’s do something. And we would like to do something. And yet perhaps we already missed a chance for action. Perhaps now it is time for attentive waiting for the emergence of new possibilities, different from what we imagine.