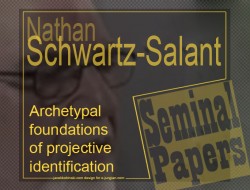 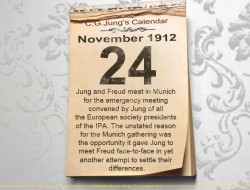 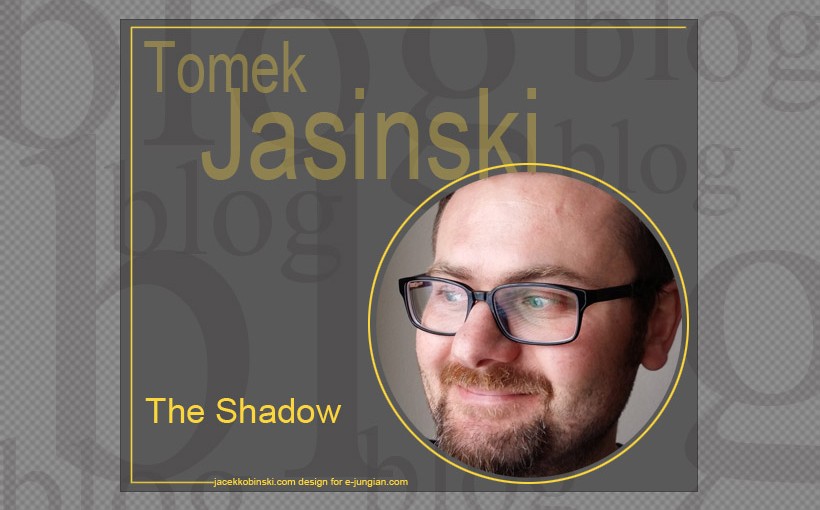 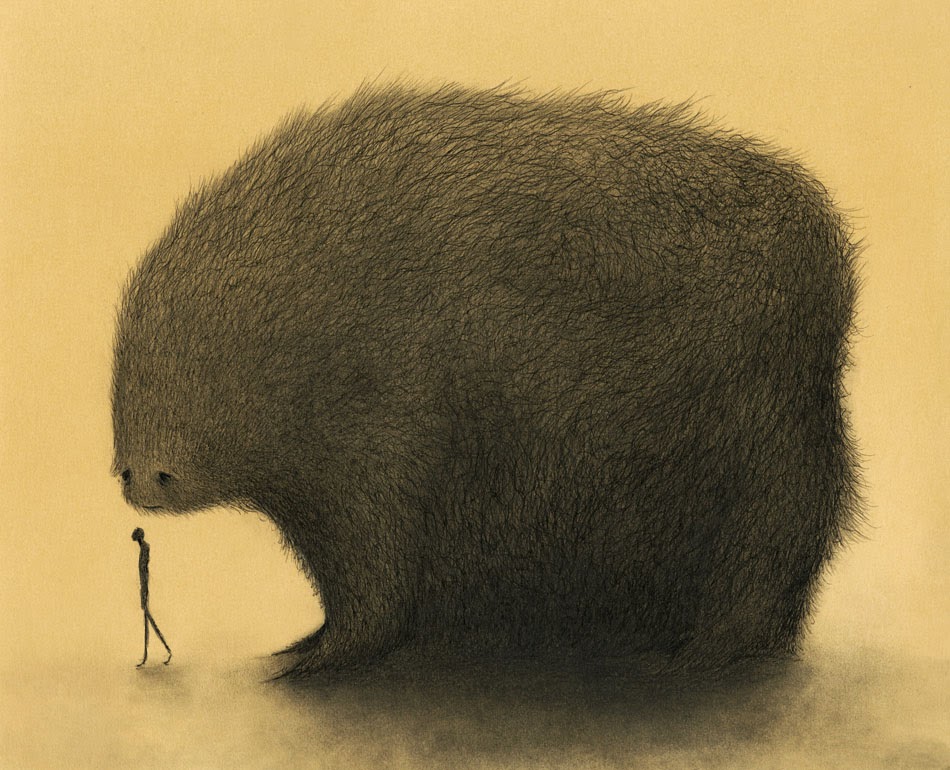 Huge overwhelming presence is attending one tiny wayfarer on his way amidst the mist. Watching his back. With gentle face. But big enough to instantly swallow it. Who is who in this painting? Who is Him and who is It? Who is the subject, who is the object? Who am I against my shadow and who is my shadow against my attempts to dis-identify with it, in my attempts to avoid dis-integration? Dis – the poignant subject in Donald Kalsched’s explication of Dante’s journey through hell [1]. To what extent we sometimes think we can compete with Dis in our disagreement to face this monster?

How many times the devil is approaching in the disguise of the benevolence? But how many times we are also terrified with brutality of inner forces that are meant to preserve life, even if at the expense of ego’s safety net? How do we then tell right from wrong and good from evil? Somehow we do, or attempt to do. But part of this process inevitably engages splitting processes.

To be a wayfarer means to be able to recognize the overwhelming presence, just behind my back. This is truly an edgy kind of experience. My guardian angel can become a beast. It is a beast. Otherwise, could it be what it really is – the Daimon? It is neither Angel nor Daemon. It is both.

Robert Bly in his Little Book on the Human Shadow says that we drag the kind of long bag behind. In the course of time the bag is getting heavier and heavier so by the time we turn forty, we eventually need to go to the analyst to find out what’s in the bag. But this is but a personal part of the story. In fact, we don’t drag any bag. And it is not even a bag. It would have been comfortable to think of it this way. But in fact it is a living, grand overwhelming presence, just few steps behind, which is carefully watching us. Attending us. Right from the start. Yes we do give it some shape but we do not create it. So we are being watched but we are hardly willing to look back. Little surprise. In most fairytales the wayfarer-protagonist is not meant to look behind at the threat of turning into stone. Terrible fathers, terrible mothers, we all know those stories of Medusa, Saturn and the like. Beware of looking behind your back!

And yet we all know the stories of children seeing the light at their bed and how they are losing that capacity to see as they grew older. Perhaps we adults fool them not to see, in a way that we fool ourselves that there is nothing in ourselves to be afraid of. It is just that terrible world around that we need to be vigilant about: minorities, politicians, multinational corporations, terrorists, refugees, whatever have you…

“Angel of God, My Guardian Dear

To whom God’s love commits me here.

Ever this day be at my side

To light and guard and rule and guide”

So far as it brings solace we can trust that voice. But when it starts asking us to revise our deepest believes, or make sacrifices, we begin to doubt. We begin to see the daemonic face of our protector. We can be trapped by its power. But we cannot free ourselves unless we look into its face. Just like it is in case of personal drama, one cannot contribute to the collective fate of so-traumatized modern world, so long as one is not willing to see growing polarization in the light of splitting and denial of our collective shared responsibility. How about Neumann’s pledge to start with ourselves? Had the idea of “the new ethics” became old enough to be dismissed as one of those interesting conceptual innovations in the field of human thought and deep psychological reflection?

Sufi masters say: everything that is wrong is my fault. Everything that happens to me is my responsibility. It is extreme. Perhaps such extremity is required to counterpoint many unreflective threads in the collective voice of the modern world as it speaks against the horrors of contemporary times.

We need to be able to tell right from wrong in order not to get lost in the complexities of the world. But it is my impression that the shadow has been diabolized. It is not that daemons don’t exist. But then, as we encounter its dual entity, we may be tempted to dismiss the duality and to see Daimon as daemon, as the devil. We need to remember that Satan himself is a fallen angel and his is the Lucifer, the bringer of light. 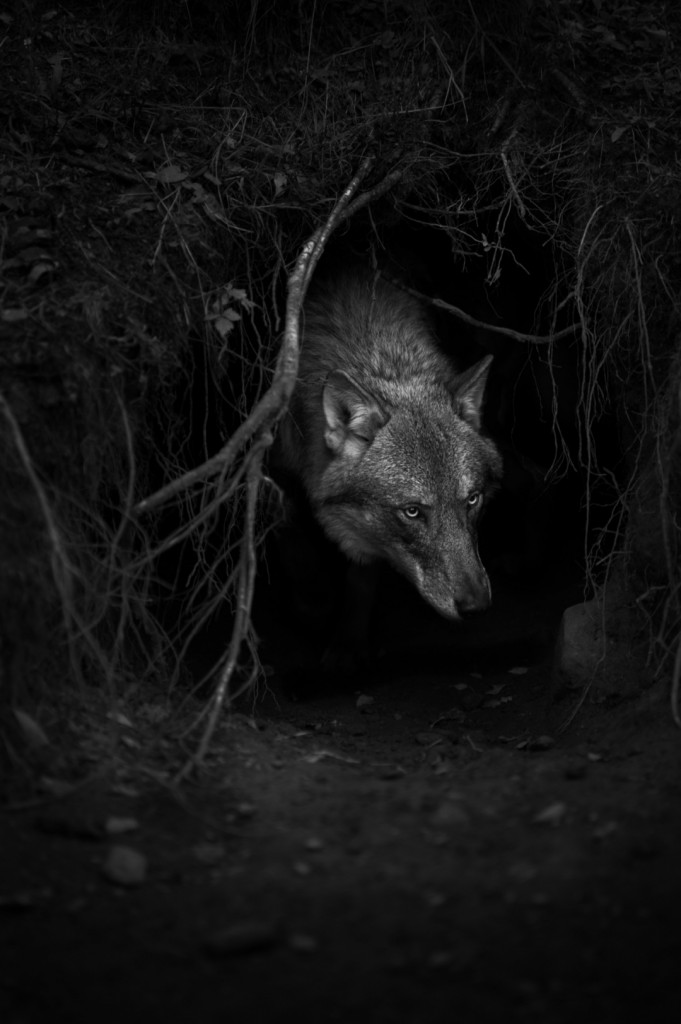 Think of the wolf as an example. Within the richness of the symbolism of this animal, in the collective consciousness he has been for the large part turned into a monster. There is a beautiful recent series of photographs by Christian Houge entitled “Shadow Within” (2010-2013). The author, when describing the creative process, tells how he discovered that the wolf has likeness to man in social behavior and how he gradually was forced to search within himself for those wild and instinctual forces that men relegated to that animal. Homo Homini Lupus…?

James Hillman once said: psyche is not unconscious – we are! The title of my title painting is “One Conscious Observer”. Good to know that there is someone conscious behind the back when one goes through rough times and is losing one’s orientation. But it is less good to consider that the direction when one needs to look to regain orientation is right there.

We don’t need to deny the terrible aspect of the Shadow. We do not need to be oblivious towards the wrong that is being done in the world. We don’t need to keep ourselves from calling the evil by its name. But as we do all of that, we need not to conclude our reflection there. It is just the beginning. After recognizing the evil that is happening we need to ask ourselves that strange and ego-incomprehensible question: how did I contribute to what has happened and what is happening, be it in my family, in my town, in my country or in the world? And as everything that engages the shadow, this idea is carrying a twofold and dubious potential, both for inflation and for humbleness. It is a dark time that we live in. In a dark time “the edge is what we have” [2].