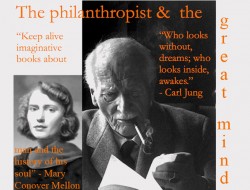 Mary Mellon – The Woman Who Decided to Save...

Jungian Analyst Professor Andrew Samuels is renowned internationally for his work at the interface of politics and therapy. At a time when many counsellors and psychotherapists see their work as involving more than the easing of personal distress, the vision of those who, like Samuels, do not want therapy to be confined to the consulting room alone proffers important pointers and inspirations for taking therapy beyond narrowly individualised clinical practice. In this extended interview, Andrew Samuels talks to Dr Richard House (co-editor of Self and Society), himself an experienced therapy practitioner and a seasoned and effective campaigner in such fields as educational policy and practice.

Under politics and therapy, Samuels and House cover the history of the connections between psychotherapy and politics, and discuss the role of therapy thinking in today’s political context. Themes covered include leadership, the economy, and ecology.

Politics in therapy includes diversity issues in the therapy relationship, and the question of how to work directly and responsibly with political, social and cultural material within the therapy session.

Andrew Samuels has been working as a therapist and analyst for over 40 years. He is recognised internationally as one of the leading commentators from a psychotherapeutic perspective on political and social problems. His work on the spirituality, the father, sexuality and countertransference has also been widely appreciated.

He is a past chair of the UK Council for Psychotherapy, a co-founder of Psychotherapists and Counsellors for Social Responsibility and also of the Alliance for Counselling and Psychotherapy. He is Professor of Analytical Psychology at Essex and hold visiting chairs at New York, London and Roehampton Universities.

His books have been translated into 19 languages: Jung and the Post-Jungians

(1986), A Critical Dictionary of Jungian Analysis

(1993), and the award-winning Politics on the Couch: Citizenship and the Internal Life