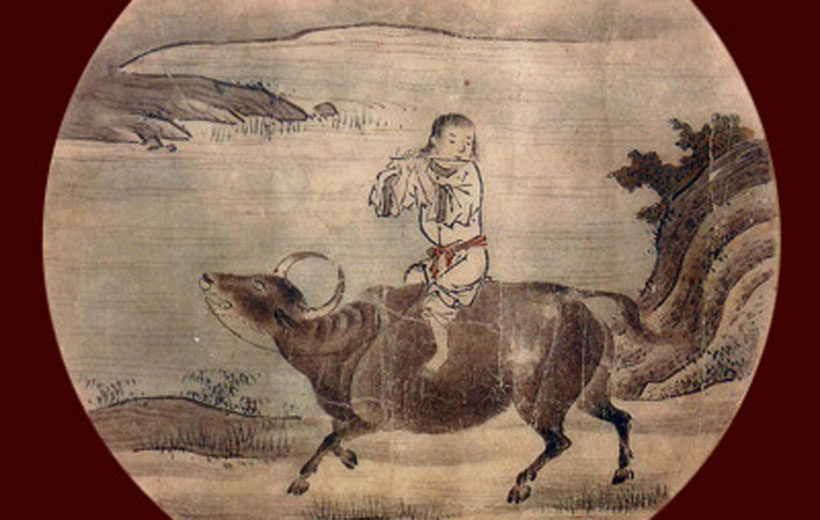 “The development of Western philosophy during the last two centuries has succeeded in isolating the mind in its own sphere and in severing it from its primordial oneness with the universe. Man himself has ceased to be the microcosm and eidolon of the cosmos, and his “anima” is no longer the consubstantial scintilla, spark of the Anima Mundi, World Soul” (Carl Jung, CW 11, par 759)

Anima Mundi is a concept mentioned in Plato’s Timaeus, established further by Neoplatonism and elaborated even further in alchemy. It refers to the interconnection of all things in the world and to the whole embracing container. Jung relied on this tradition and tried to reconnect the isolated modern human psyche to the World Soul. Though the concept Anima Mundi is rooted in the Western tradition, similar ideas are recognizable all over the world. For example in Japan, nature is considered and experienced as an all-embracing container. Our Logo shows the sixth of ten ox-herding pictures of Zen Buddhism in which the way to enlightenment is shown as the quest of an ox. The picture is surrounded by the round form and nature, which may symbolize the Anima Mundi. The popularity of sandplay therapy in Japan has probably to do with the holding power of nature and acknowledgement of the soul in each thing.

Jung’s observation about the disconnect between modern man and the World Soul seems to be even more evident and more disconcerting than ever resulting in a sense of profound uncertainty in what feels like a period of radical transition. The reality of climate change and the disregard for the ecological crises we are facing by many world leaders in favor of economic development reflect well the reigning sense of dissociation from Anima Mundi. What is the impact of this on Anima Mundi?

In our clinical practice, we are increasingly confronted with expressions of the growing chasm between modern man and soul. For example, the diversity and severity of symptoms such as personality disorder and autistic spectrum disorder raise questions about the relevance of classical analytic work. In addition, the very practice of our profession is being challenged in different parts of the world. Is it still possible to find a connection to the whole embracing World Soul in a living way through depth analytic work when the zeitgeist insists on a quick fix?

The impact of technology has totally changed communication and human relationship. Extreme isolation in a world of virtual reality co-exists side by side with immediate but superficial contact through the web. Is there still a place for meaningful interconnection, the very basis for depth analytical work, in a world so fixated on instant gratification?